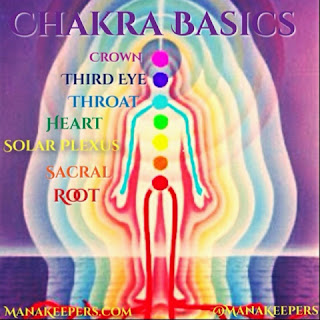 Chakra is a Sanskrit word that translates as wheel or disc. A chakra is a center of activity that receives, assimilates, and expresses life force energy. The chakras are like spinning spheres of bioenergetic activity emanating from the major nerve ganglia branching forward from the spinal column. Six of these wheels are located in a column of energy that spans from the base of the spine to the middle of the forehead. The seventh is beyond the physical region above the head. Each chakra in your spinal column is believed to influence or even govern bodily functions near its region of the spine. 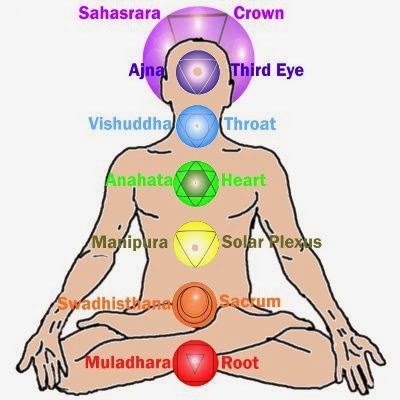 Seven major chakras or energy centers exist, located within the subtle body. Practitioners of Hinduism learn that the chakras interact with the body's ductless endocrine glands and lymphatic system by feeding in good bio-energies and disposing of unwanted bio-energies.
Much of the original information on Chakras comes from the "Upanishads", which are difficult to date because they were passed down orally for approximately a thousand years before being written down for the first time between 1200–900 BCE. 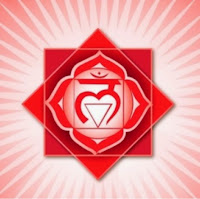 Muladhara: The Base Chakra or root chakra is related to instinct, security, survival and also to basic human potentiality. This centre is located in the region between the genitals and the anus. Although no endocrine organ is placed here, it relates to the gonads and the adrenal medulla, responsible for the fight and flight response when survival is under threat. In males, there is a muscle located in this region that controls ejaculation. A parallel is charted between the sperm cell and the ovum where the genetic code lies coiled and the kundalini. Muladhara is symbolised by a lotus with four petals and the colour red. Key issues involve sexuality, lust and obsession. Physically, Muladhara governs sexuality, mentally it governs stability, emotionally it governs sensuality, and spiritually it governs a sense of security. 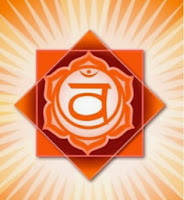 Svadisthana: The Sacral Chakra is located in the sacrum and is considered to correspond to the testes or the ovaries that produce the various sex hormones involved in the reproductive cycle. Svadisthana is also considered to be related to the genitourinary system and the adrenals. The Sacral Chakra is symbolized by a lotus with six petals, and corresponds to the color orange. The key issues involve relationships, violence, addictions, basic emotional needs, and pleasure. Physically, Svadisthana governs reproduction, mentally it governs creativity, emotionally it governs joy, and spiritually it governs enthusiasm. 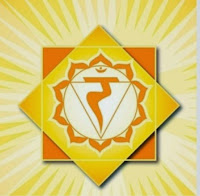 Manipura: The Solar Plexus Chakra is related to the metabolic and digestive systems. Manipura corresponds to Islets of Langerhans, which are groups of cells in the pancreas, as well as the outer adrenal glands and the adrenal cortex. These play a valuable role in digestion, the conversion of food matter into energy for the body. Symbolised by a lotus with ten petals. The color that it corresponds to is yellow. Key issues governed are issues of personal power, fear, anxiety, opinion-formation, introversion, and transition from simple or base emotions to complex. Physically, Manipura governs digestion, mentally it governs personal power, emotionally it governs expansiveness, and spiritually, all matters of growth. 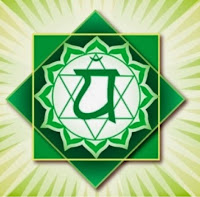 Anahata: The Heart Chakra is related to the thymus, located in the chest. The thymus is an element of the immune system as well as being part of the endocrine system. It produces the T cells responsible for fending off disease and may be adversely affected by stress. Anahata is symbolised by a lotus flower with twelve petals. Anahata is related to the colors green or pink. Anahata involve complex emotions, compassion, tenderness, unconditional love, equilibrium, rejection and well being. Physically Anahata governs circulation, emotionally it governs unconditional love for the self and others, mentally it governs passion, and spiritually it governs devotion. 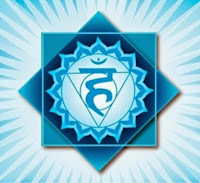 Vishuddha: The Throat Chakra relates to communication and growth through expression. This chakra is paralleled to the thyroid, a gland that is also in the throat and which produces thyroid hormone, responsible for growth and maturation. Symbolised by a lotus with sixteen petals. Vishudda is characterized by the color light or pale blue, or turquoise. It governs such issues as self-expression and communication. Physically, Vishuddha governs independence, mentally it governs fluent thought, and spiritually, it governs a sense of security. 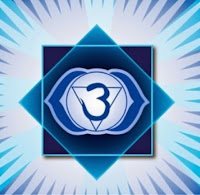 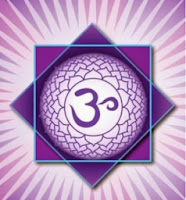 Ajna: The Brow Chakra (also known as the third eye chakra) is linked to the pineal gland. The pineal gland is a light sensitive gland that produces the hormone melatonin which regulates sleep and awakening. Ajna is symbolised by a lotus with two petals, and corresponds to the color white, indigo or deep blue. Ajna's key issues involve balancing the higher & lower selves and trusting inner guidance. Ajna's inner aspect relates to the access of intuition. Emotionally, Ajna deals with clarity on an intuitive level.

Sahasrara: The Crown Chakra is generally considered to be the chakra of pure consciousness. Its role is somewhat similar to that of the pituitary gland, which secretes hormones to communicate to the rest of the endocrine system and also connects to the central nervous system via the hypothalamus. The thalamus is thought to have a key role in the physical basis of consciousness. Symbolized by a lotus with one thousand petals, it is located at the crown of the head. Sahasrara is represented by the color violet and it involves such issues as inner wisdom and the death of the body. Sahasrara's inner aspect deals with the release of karma, physical action with meditation, mental action with universal consciousness and unity, and emotional action with "beingness" 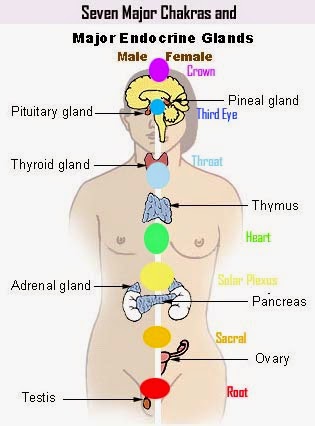